I posted over in the Intros subforum but now that I've got a p'up, I figured I would share a few pictures of it here as well.

The ad came across my FB marketplace feed on Sunday night, newly posted just 40 minutes prior. I messaged the seller and told him I'd be down tomorrow to look at it. He had it listed at $1000, which was right in my price range.

I arrived and found that the floors were solid, tires relatively new, cable system worked fine, and there was a newly-filled propane tank. The roof is in sorta rough shape but doesn't leak. There's various colors and types of caulking added as well as some clear tape on the corners. But allegedly, it doesn't leak...saw no signs of it, anyway! The interior is damn near spotless, and the canvas is in great shape for its age.

Due to the condition of the roof, I offered $800 and shortly after, I had it hooked to the wagon. 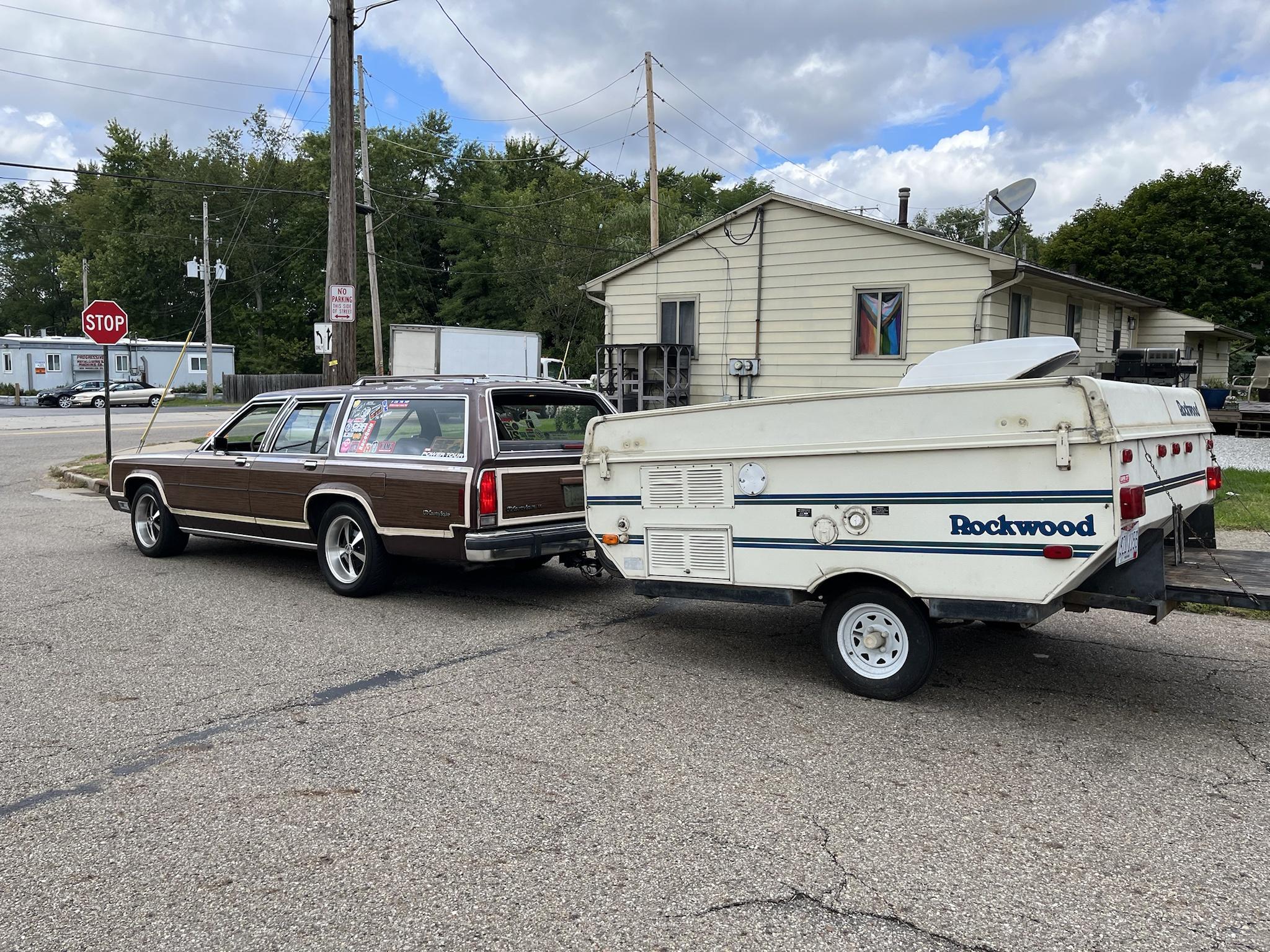 A word about the wagon: man, it towed decently once I got it up to speed. But the 302 with the HO cam (not original) is set up more for unladen performance. It doesn't really do great getting up to speed. You kind of have to schedule it on your calendar. I did get it up to 75 and the car and camper felt very stable, but...yeah. I won't be winning any races.

On the way home, I practiced backing in an abandoned parking lot. EZPZ. Decided to sneak it down my Dad's single-wide driveway and around the corner next to his oak tree. 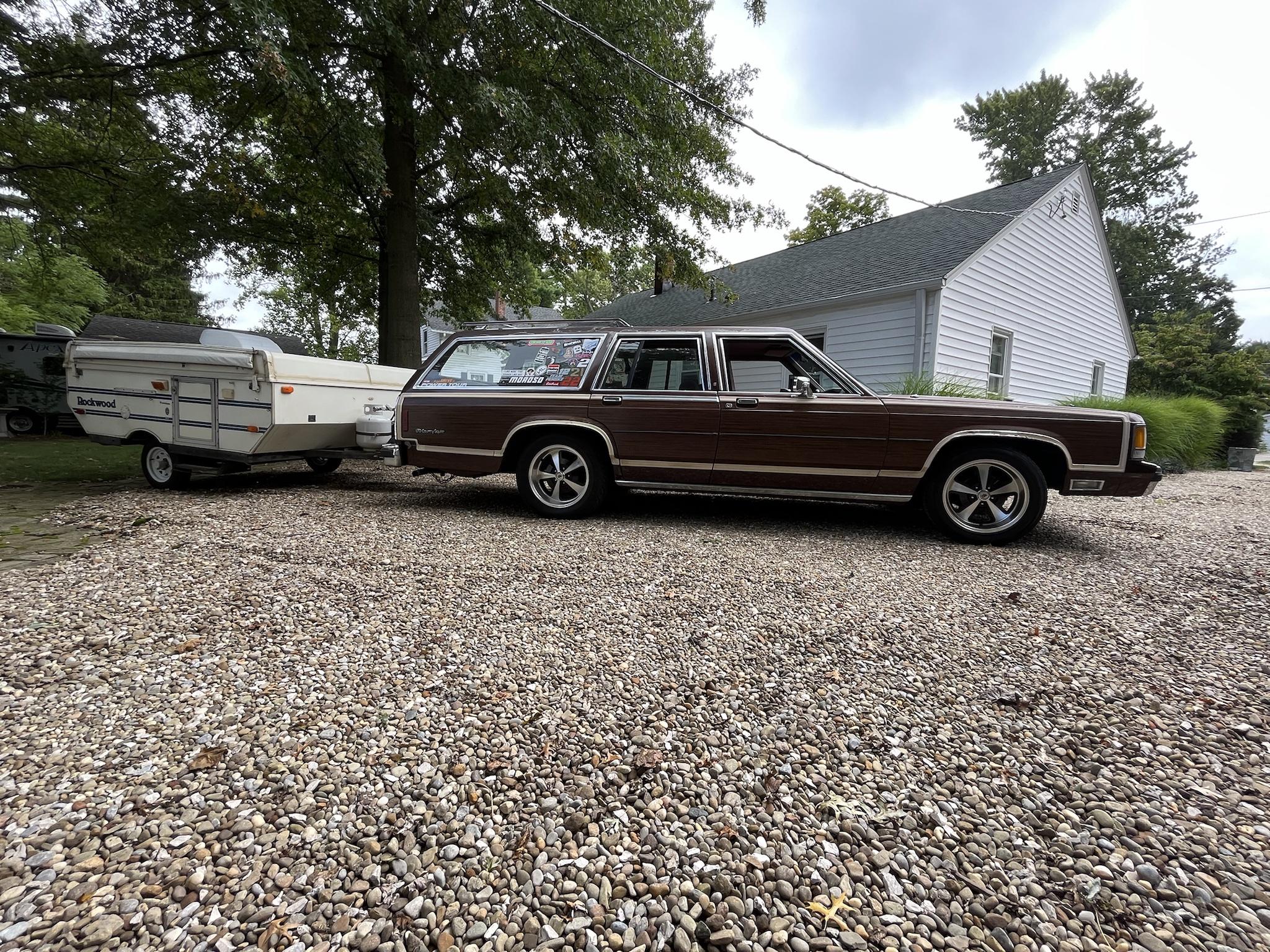 Then, of course, a few beers while we looked at it. This rear shelf has got to GO: 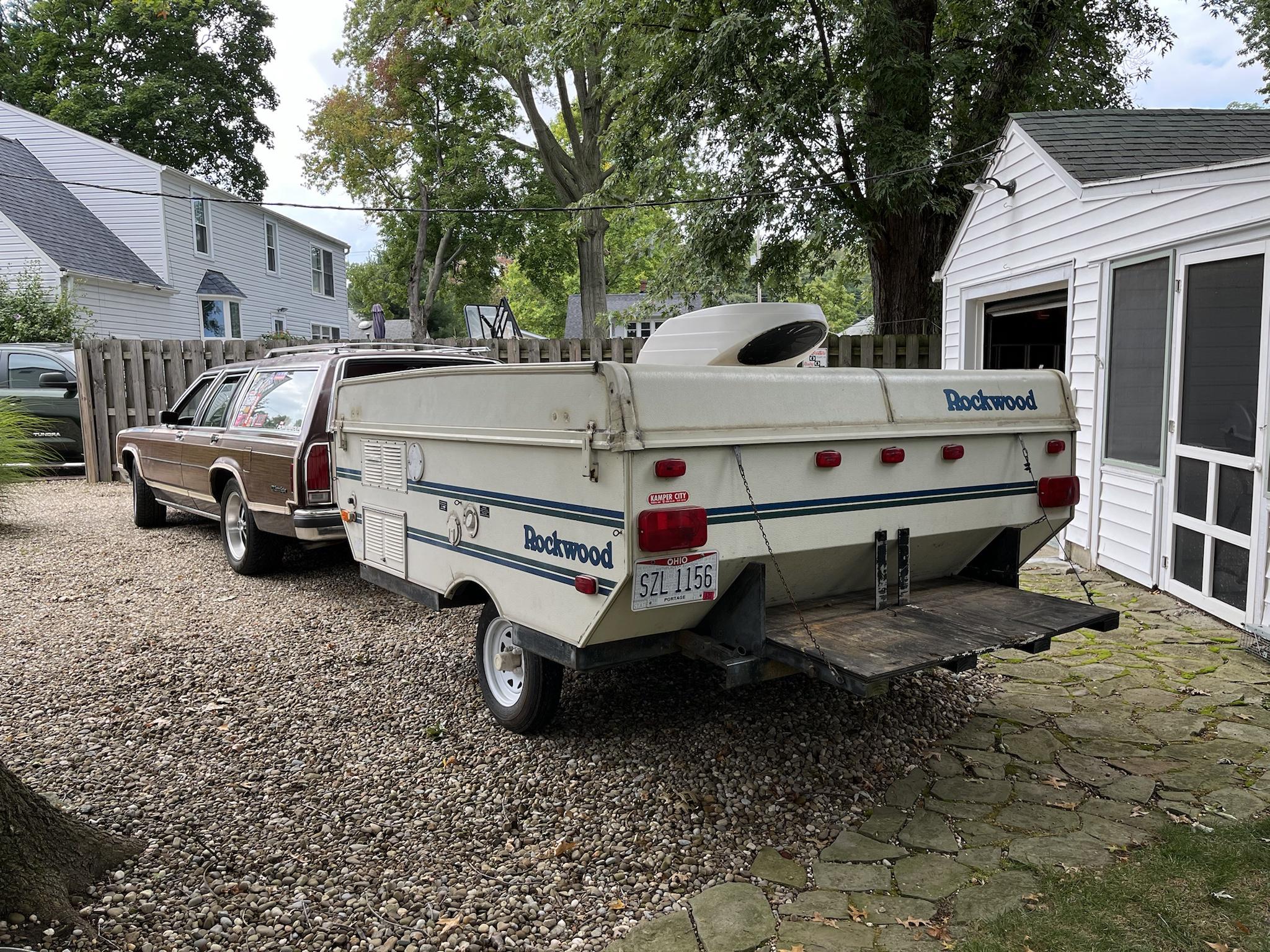 After a while, I decided to set it back up. 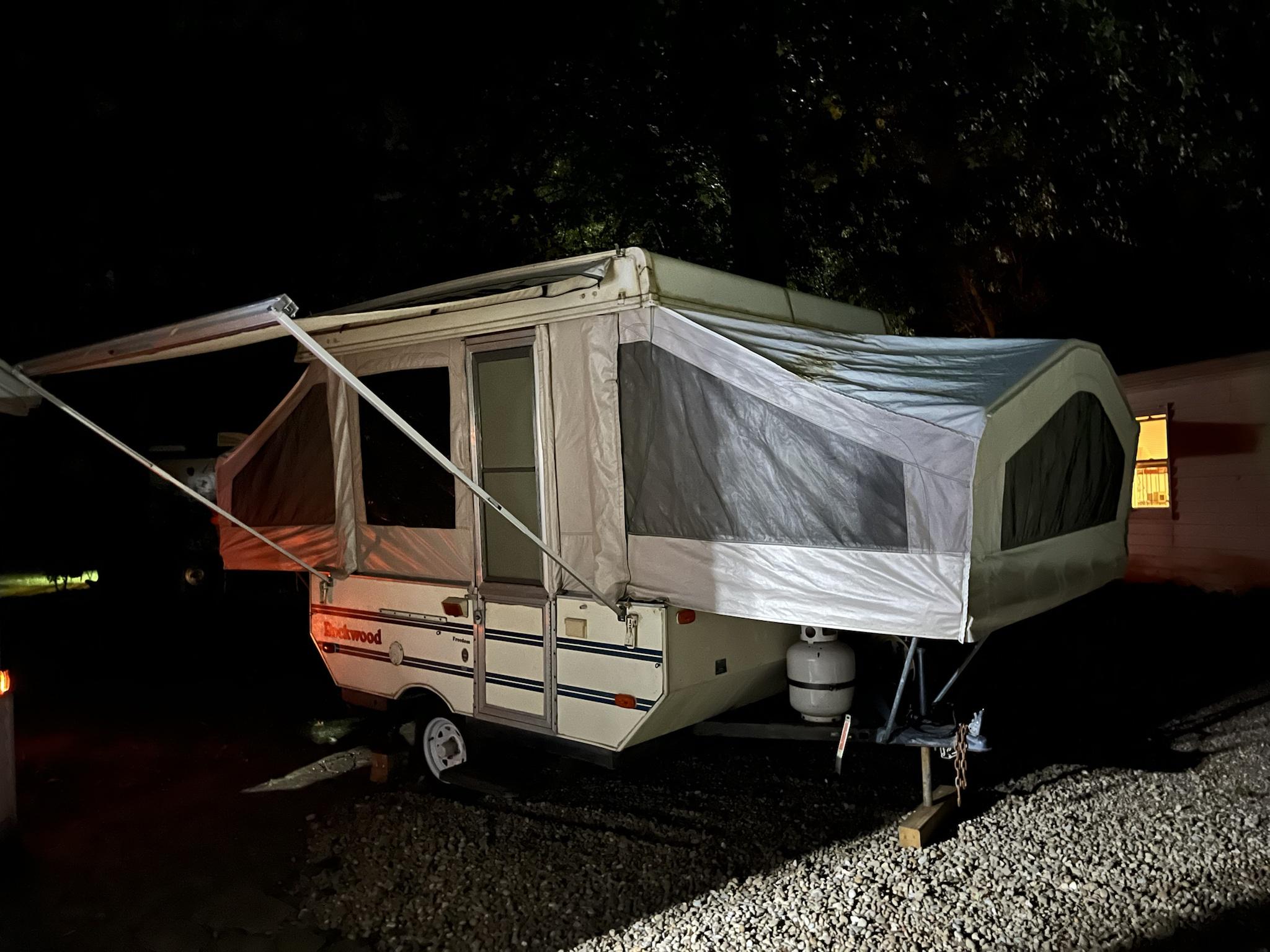 Yeah, I know the awning isn't correct, but it's the best I could do with the daylight I had. (none)

Looking forward to dragging this around to a few state parks before the snow flies.
S

Looks like a nice little camper good luck with it.
A

I got a text from my dad a few minutes ago. (I leave the camper at his house because he has extra driveway space)

Apparently, he got bored and took the rear shelf off.

Much better. Now to figure out the best way to mount a 2” receiver so I can run my bike rack out back. 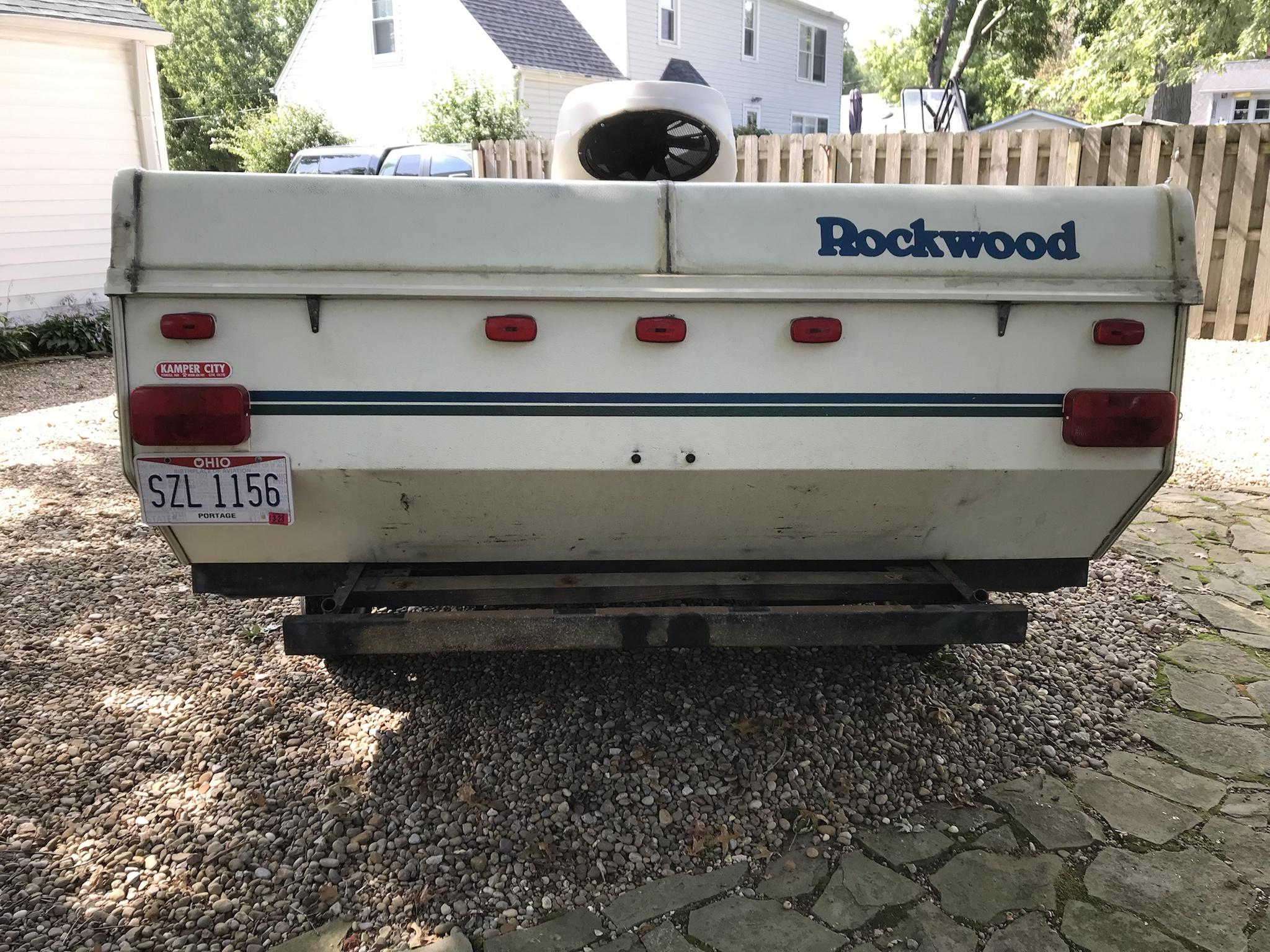 One of the weird nuances of the Rockwood (compared to our old Coleman, anyway) is that it only has stabilizer jacks in the rear. The front is stabilized by the tongue only. So that makes it a little bouncy especially when my fat a** is in it. I ordered a set of these on the jungle website: 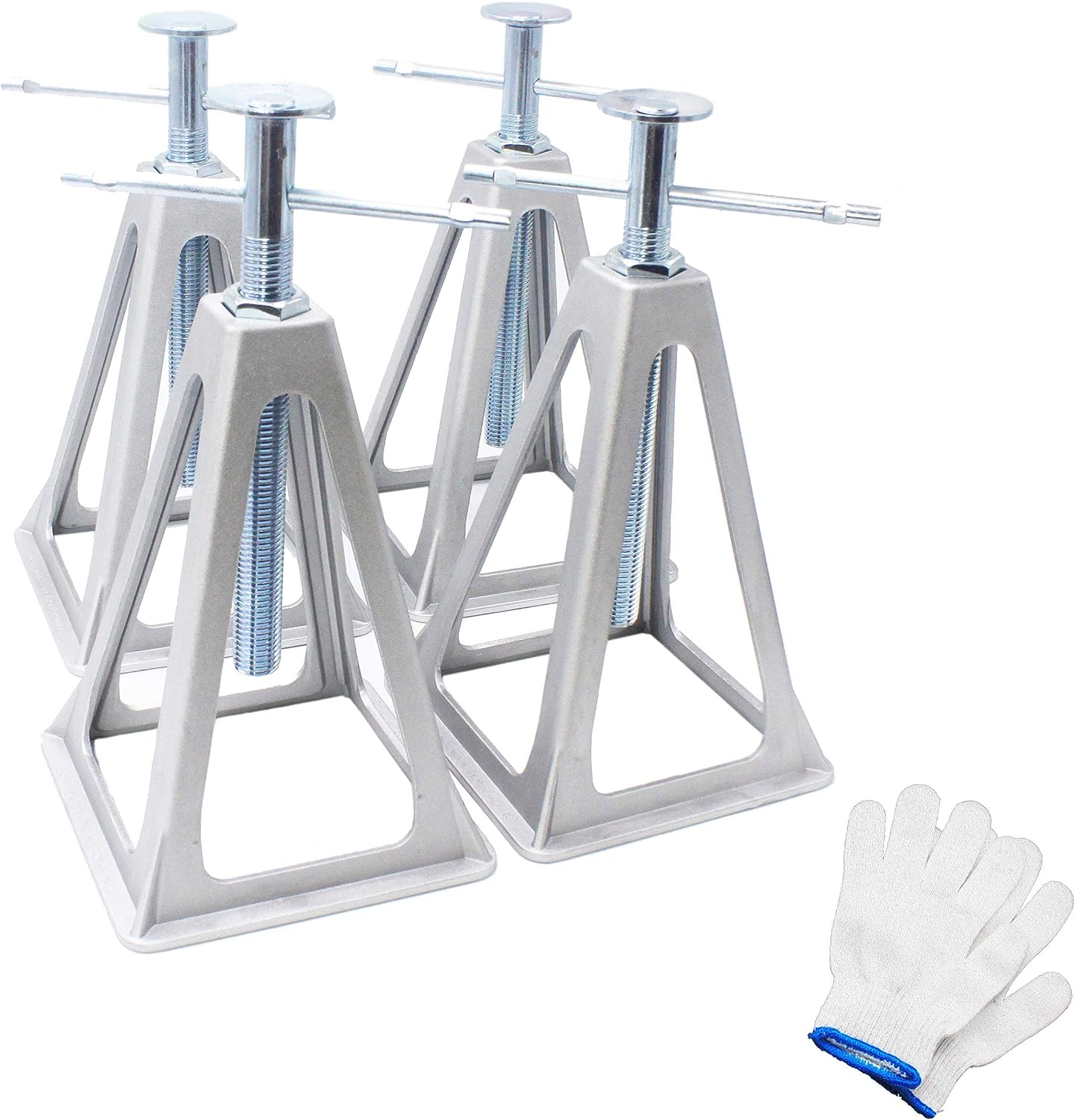 I know they make scissor type jacks that you can weld or bolt to the frame, but these were cheap and will give me 4-corner stabilization, which is what I'm after. Nothin' fancy but not too shabby.
S

Thats all you need.

Thanks. It's a tow-prep car so it has the K-code 3.55 rear end, heavy duty rear suspension w/cargo coils, trailer brake controller (of course I'm not using it with this), 7 and 4-pin connectors, and dual exhaust.

The previous owner did a motor swap out of one of his other cars, so it's actually a 1985 (I think) block, '80s Mustang E7 heads, Ford Explorer throttle body w/spacer, 2004ish Crown Vic airbox, 3G alternator, police rear sway bar, wide-ratio AOD transmission with a Lentech valve body, and a 140mph police car speedometer..............not that anyone asked but it's easy to rattle the info off since I've done it so many times.

It was a Buffalo car prior to coming to Cleveland and it has all the rust to prove it. I don't drive it in the winter, but someone sure did.

There are a number of posts here of putting a hitch on back for bikes you may want to read some experiences and pro and cons before diving into that..... I personally want one but not wanting to risk frame damage

How ‘bout some pictures of the inside.
A

Michael J said:
There are a number of posts here of putting a hitch on back for bikes you may want to read some experiences and pro and cons before diving into that..... I personally want one but not wanting to risk frame damage
Click to expand...

Yeah, I did start reading up and decided it’s a bad idea for me. I’m gonna look into some other options.
A

Johneliot said:
How ‘bout some pictures of the inside.
Click to expand...

Should’ve taken more. This is all I have. 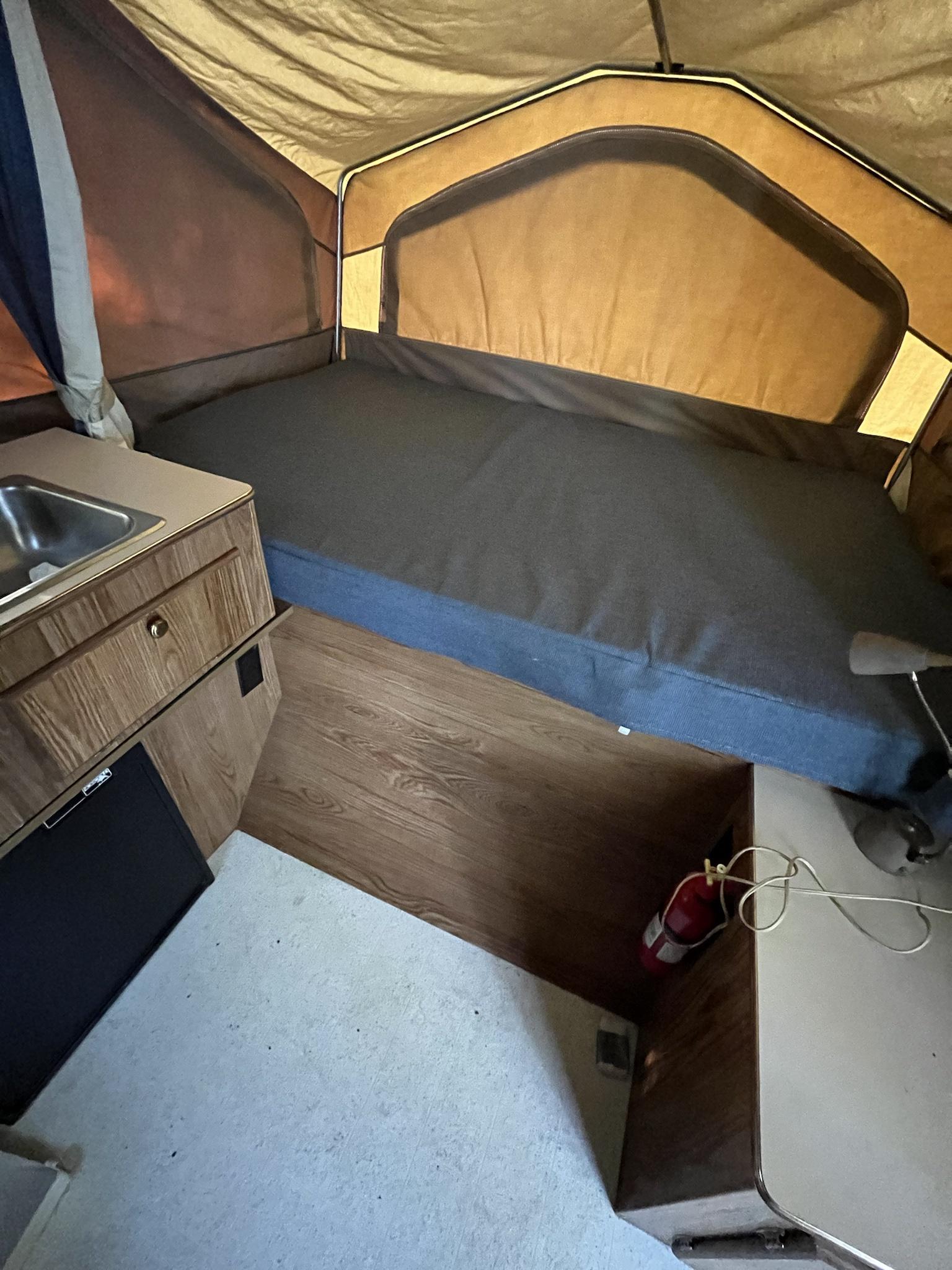 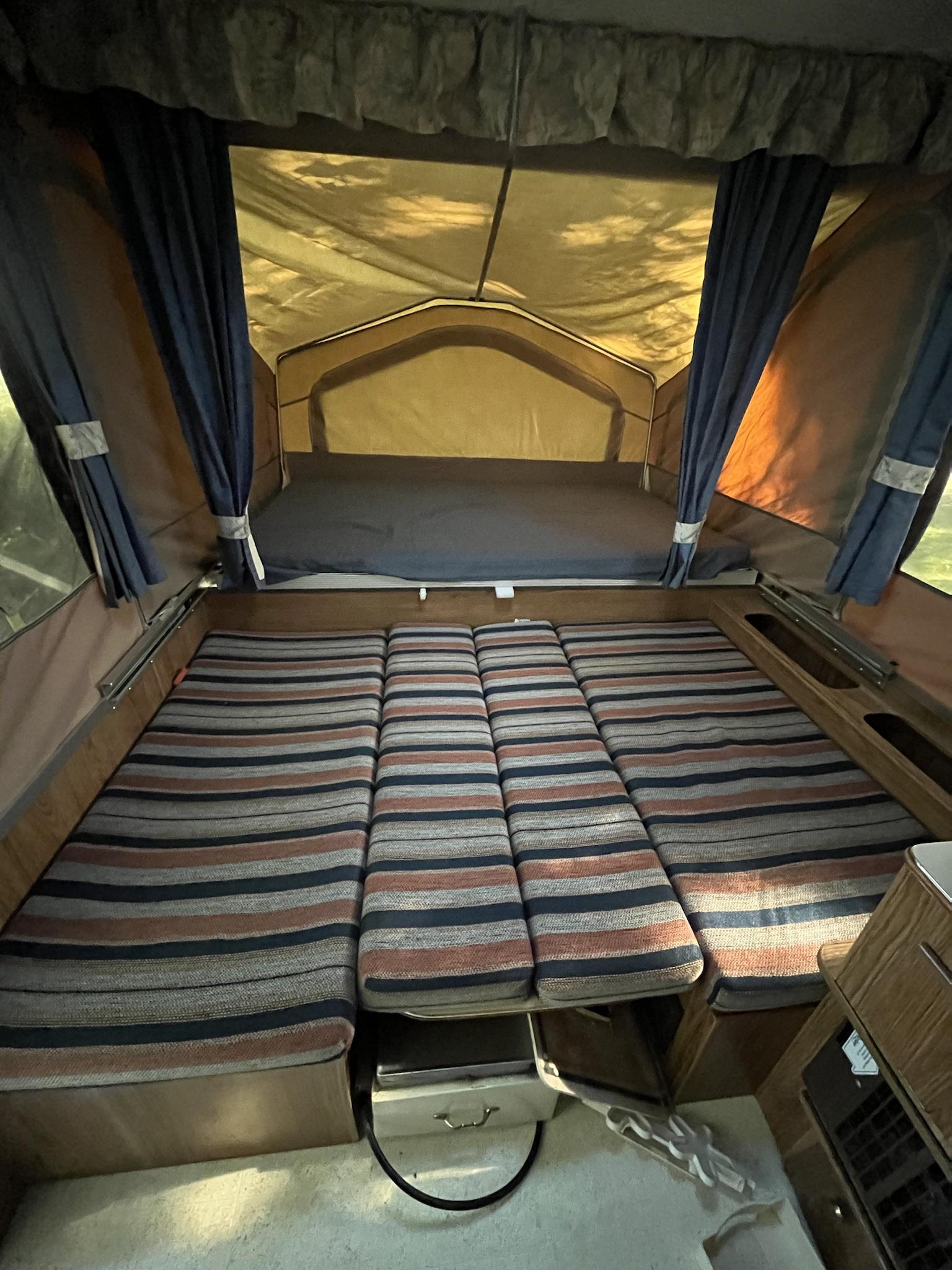 a_d_a_m said:
Yeah, I did start reading up and decided it’s a bad idea for me. I’m gonna look into some other options.
Click to expand...

There is always, possibly an option to put a rack on top I just can't lift mine to put up there with a ruff back
A

I really would prefer to not load on the roof for similar reasons + the roof is not exactly this camper's strongest attribute.

I may end up moving the propane tank and tongue-loading the bikes.
A

Well, I haven't taken it out yet, but I did move the spare tire from the tongue to the rear. I should've taken a picture of how it was mounted before...really strangely, honestly. This made use of what I had laying around so, while technically incorrect, it is holding on good enough. I also had a 1/4 can of Rustoleum spray paint so I 'restored' the bumper without doing any prep work...

Late to the party here, but congratulations on the new pup! And I love your TV! Whatcha got there? Queen Family Truckster??

neighbormike said:
Late to the party here, but congratulations on the new pup! And I love your TV! Whatcha got there? Queen Family Truckster??

I get the Truckster comments ALLLLLLLLLLLLLLLLLLLLLLLLLLL the time, and have been offered money for my wagon by people who want to convert a wagon into the WQFT. However, this one is more equipped like the wagon Clark Griswold initially ordered (but didn't get), the "Super Sports Wagon with the C.B. and optional rally fun pack."
A

Took the p'up out for its maiden voyage on Monday and Tuesday. Pymatuning State Park (OH side), site 348. Rained almost constantly other than when it switched to snow. (Pic below is from when I had just arrived and it was almost trying to be sunny)

I brought a ceramic heater along to keep warm and I must say it did the job! Was glad to not have to rely on the propane furnace. 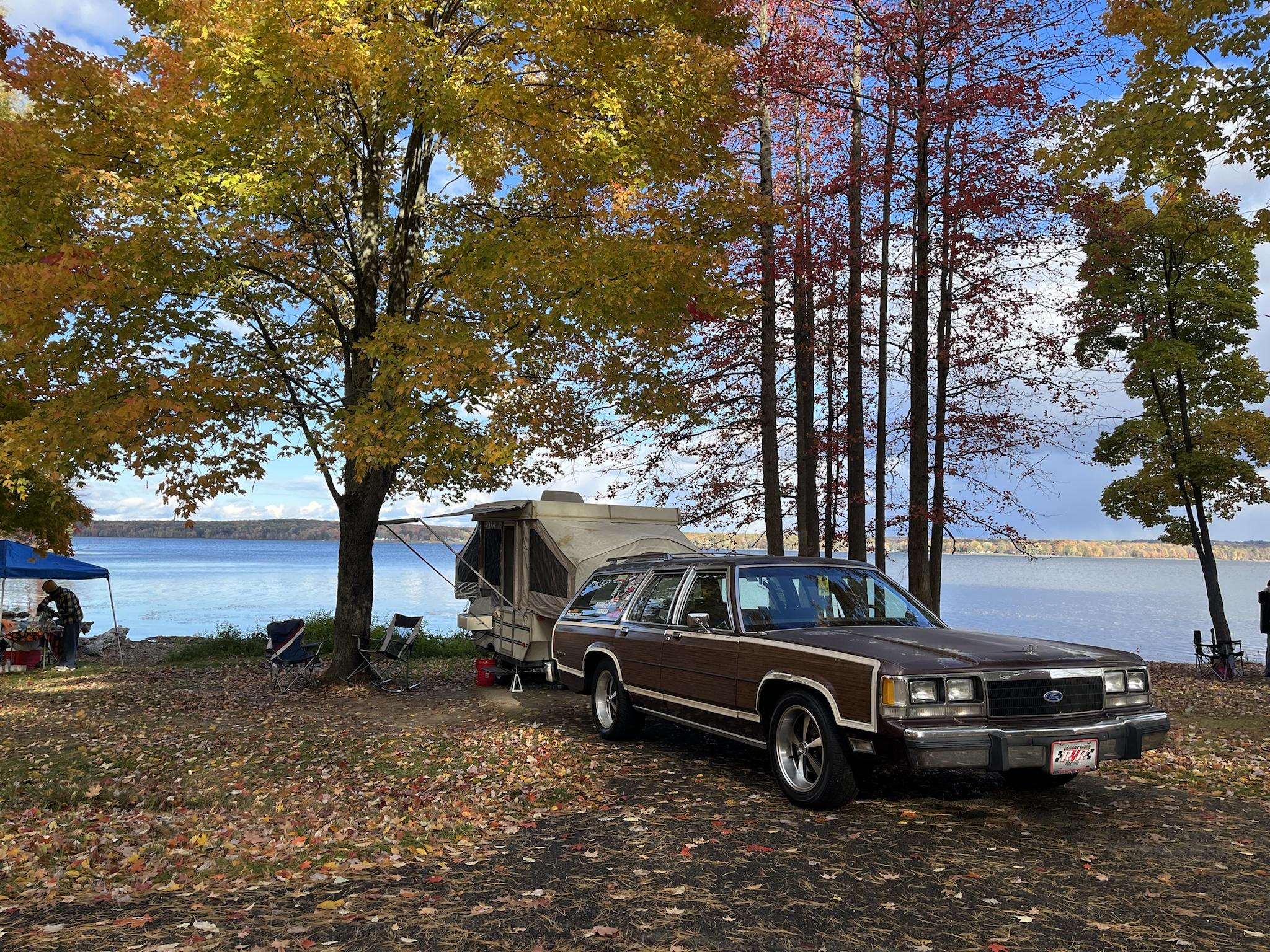