I have a 2020 Ford Ranger with the tow package with a seven and four pin connector. I'm looking at getting a Ranger 10 or 12 Aliner and wondering if I'll need a brake controller?

Only if you plan on using the trailer brakes to stop it.

Willam Bond said:
I have a 2020 Ford Ranger with the tow package with a seven and four pin connector. I'm looking at getting a Ranger 10 or 12 Aliner and wondering if I'll need a brake controller?
Click to expand...

Does your ford have a built in brake controller?

Unless you have one of the models with a built-in brake controller, you need one. It is what communicates to the brakes on the trailer.

If you get a trailer with brakes, you need a controller. Brakes make for a more pleasant drive and, once you get the controller installed, require very little thought to use.

I would be surprised if your truck doesn't have an easy port to plug in a controller. Check the manual.

Adventures with KODI in AZ

Definitely install a brake controller. You can feel the difference between having and not having one. It made towing our Classic easy with our Colorado and then the Titan.

AFAIK, all A-Liners have electric brakes (even the Scout-Lite), so you will need a controller to match your TV braking. It makes for a great difference in towing.
D

Not sure about where you are, but where I live, if the trailer has brakes, it is the law that you must use them, and to use them you need a brake controller and a 7 pin connection that is fully wired up properly to the TV.

Bad news, you need a controller. Good news, they're very inexpensive and easy to install. Our 2017 Chevy had a plug in, bet your Ford does too! Our mechanic was going to charge $50 to hardwire the $75 controller I found on Amazon, with the plug in he only charged $20.

If there is something that looks like this on your dash, you have a brake controller built in (should with the tow package): 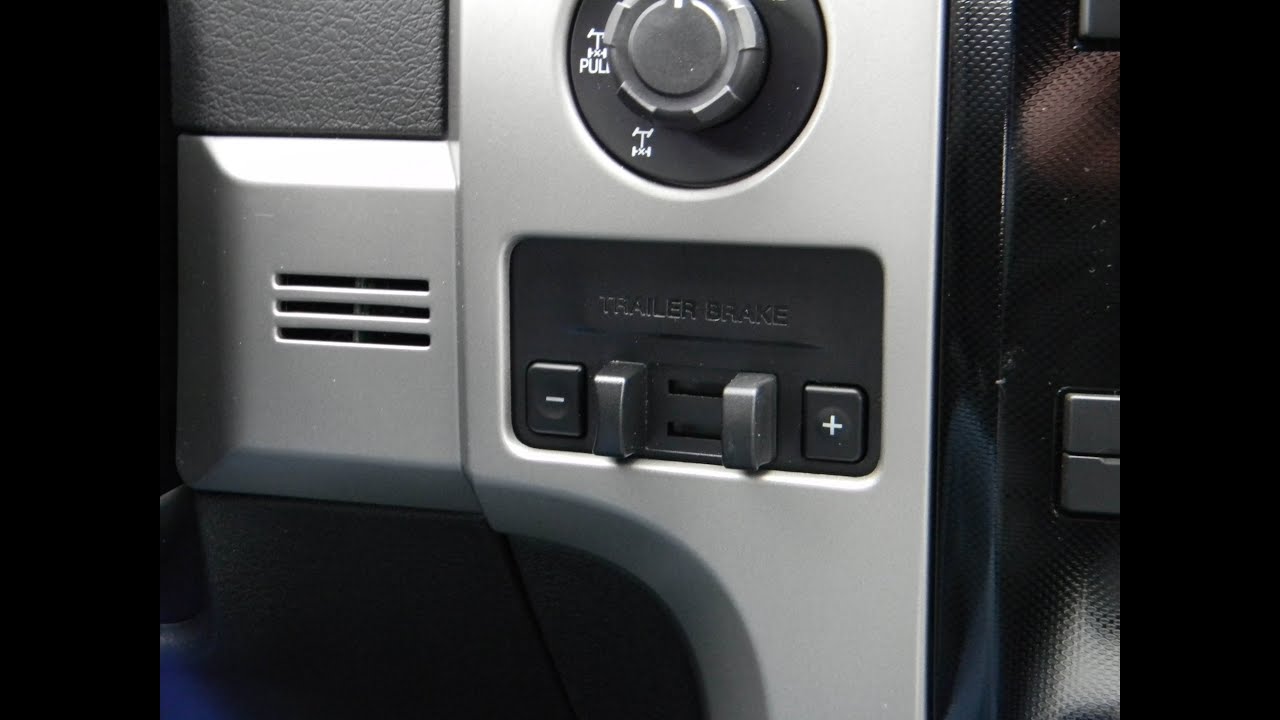 If not, you need a brake controller. As others said, it's pretty much plugging in a plug and mounting a box to your dash. No harder than mounting a CB... oh man, I'm old.
T

I have a 2021 Ford Ranger with the 7500lb factory tow package. There are no factory installed brake controllers. Ford puts together a kit that includes the same model Redarc controller I've put in other vehicles. If you have the forward collision prevention system, you must use Ford's brake controller. This is because you can't use the brake pedal signal as most brake controllers do as that signal doesn't capture emergency automated braking. Only the Ford kit picks up the emergency braking through a specific input module and wiring harness they include. The install is easy, but time consuming as you have to tap into the 3rd brake light signal, at the point it located at.

I put this in myself, paid about $300 for the kit through a dealer that sponsors the ranger5g forum. I don't know the labor costs, but it will be higher than a standard install. You'll need a brake controller for towing anything over 1500lbs. Let me know if you need more info, I've done lots of mods to my ranger.
Last edited: Sep 28, 2021

More on this, I have this as my setup:

View media item 12610
An Echo Brake Controller may need to be affixed more securely than with the supplied strap.
In one of my trips, it disconnected due to vibration/bumping. I added a small bungee cord, it worked nicely!
T

Pedro Galvan said:
More on this, I have this as my setup:

View media item 12610
An Echo Brake Controller may need to be affixed more securely than with the supplied strap.
In one of my trips, it disconnected due to vibration/bumping. I added a small bungee cord, it worked nicely!
Click to expand...

I always wondered how well those devices do. For the 2019-2021 Ford Ranger with the forward collision detection system, this is not a Ford approved option as it will not be activated during emergency braking. Lot's of info on the ranger5g.com forum on this if interested.

Oem tow pkg these days that doesn't include a controller?! So stupid!! Even my ford flex has an oem one

You could probably get by without one, but it's going to be a lot safer to use a good brake controller, especially if you are towing in places with mountain passes.
T

wusthof said:
Oem tow pkg these days that doesn't include a controller?! So stupid!! Even my ford flex has an oem one
Click to expand...

When I was shopping for our Ranger, here's what I found:
1. Ford Ranger - as described earlier in the thread, but another bit - there is no plug for a plug-n-play install, but there are the needed wiring is sitting capped under the dash.
2. Ford F150 - DOES have a plug under the dash for a plug-n-play install, and companies like Redarc sell the appropriate adapter to plug their own controllers into it.
3. Chevy Colorado/GMC Montana - Chevy/GMC have a factory option for a brake controller - the great thing about it is that it's controls and display are built into the various controls and displays on the dash.

We didn't look at the details for Toyotas or larger GM trucks. However, you can get a sense of this before you buy through looking at which vehicles Redarc offers their plug-n-play adapters for.

Overall, I definitely agree - any TRUCK manufacture that sells a "factory tow package" should include the brake controller. I can see not doing this in passenger cars where the tow receiver is basically a mount for a bike rack!

If you are buying a controller, skip the time delay options and go for a proportional controller. You will be happier with the performance of the controller. It is worth the extra dollars spent.
S

wusthof said:
Oem tow pkg these days that doesn't include a controller?! So stupid!! Even my ford flex has an oem one
Click to expand...

They never did, lol. They call it the trailor prep package. Its preped, but not installed!
T

Specifically, for the 2019+ Ford Ranger - the controller included in the kit is the Redarc Elite proportional controller, see the link below. This is my second vehicle for this controller and it works really well. You also have a function on the proportional dial to activate trailer brake manually, in case you need to correct any fish tailing of the trailer.

Link to the controller that is in the Ford kit: Tow Pro Electric Brake System | REDARC Electronics