This hasn't happened to me yet but it came to mind recently and I'm wondering how this is done on a single axle trailer.
W

I only chock one wheel front and back.
So chock the wheel that isn't levelled.

Once your stabs are down you should have zero fear of it rolling anyhow.

Same. I chock the wheel that isn't on top of my Lynx. Then the stabs go down, and she's rock solid.

If you wanted and extra bit of chocking, you could use one of those jack wheel chocks like this:

You folks are brave
X

When I had my Apache, I used boards for leveling. I just cut them long enough so a chock would fit in the board.
S

xxxapache said:
When I had my Apache, I used boards for leveling. I just cut them long enough so a chock would fit in the board.
Click to expand...

I think that is what I will do. I have a bunch of Lynx leveling blocks, but what good are they of the camper gets damaged.
9

A ball leveler and a ball chalk would go a long way for stability and security. Chalking one side of a single axle is waiting for trouble to happen and the shake and shimmy inside would drive me nuts. With those two devices, it would be like setting your tires in concrete and are very simple to use.


I use X chocks on my tandem axles. The ball chalk binds the blocks against the wheel and virtually eliminates any play for and aft. With stabs down and the leveler, can't get any more stable without a foundation.
M

I have always chocked both wheels for added security. I use block levelers (3 wide) in conjunction with Bal Locking Chocks on both sides. Also have a Fastway Flip Jack Foot on the front. Rock solid and is going nowhere.
M

I made a U-shaped chock out of 2x4's that I use whenever I put a wheel up on Lynx blocks. i.e, the 2 "legs" of the U are the chocking surfaces that go in front and back of the tire, and the bar that holds the legs in place keeps them functional no matter what surface (as in a slick lynx block) it is on top of. I made it slightly small, and I kick it in to wedge it in place.

Chocking only one side seems like a really bad idea. Counting on the stabs to hold things in place would have to rely on the stabs not sinking in, which they certainly will on rock, sand, or earth. Even to some extent asphalt. Concrete is about the only surface that isn't going to give, and you really shouldn't be cranking them down with much force anyway.

I also always put the tongue jack wheel on a single Linx block so it can't roll - it sits down in between the nubs. i.e, same idea as the yellow thing in generok's picture above.
H

You all have been very helpful and I appreciate the time you have taken to educate me.

How unlevel are the sites you're setting up in? If it looks like this, I'd chock the other wheel too, I guess.

I'd rather be camping!!

Funny you post this as I just made these today!!

My pup tires are smaller than recommended, I'll replace these with the proper size when I can, but I need to put with wheels at least on a 2x12 so the slide out and step can function properly!

This may or may not work as planned. It would probably be better to us 2 peg's than 1... but this is what I had and what I did. I have multiple more 2x12's, 2x4's, 1x4's, and other smaller stuff that are drilled, some with 2 holes to adjust how it sits, and most holes on the smaller stuff is not centered so it can be flipped around!! I have the very small 4.8-8 wheels so with the peg centered to the wheel it should not move!

3/4" hole and 1/2" conduit!, I already had all the stuff in the garage, if buying to do this I would use smaller hole and conduit!

Back when we had the pup and before we had the BAL leveler I used two pair of homemade wood chocks in front of and behind both wheels all the time.. When we got the BAL leveler then we only used one pair of the wood chocks on the high side wheel since the BAL took care of the low side.. One thing we did do right from the start was to remove the tongue jack wheel and use a wood block instead..

With the TT we use 3 different styles of chocks.. Have the same wood chocks we use in front and behind the wheels, have two pair of home made "between wheel" chocks and recently we also picked up two chocks similar to the BAL tandem wheel chock..

We chock both low and high side wheels all the time..
W

BAL "Light Trailer Tire Leveler" on the low side and BAL "Single Axle Tire Locking Chock" on the high side.

We chock the wheel not on the blocks, and usually use the Lynx chock on the wheel on blocks. When we had a nose wheel, we used a wheel dock. 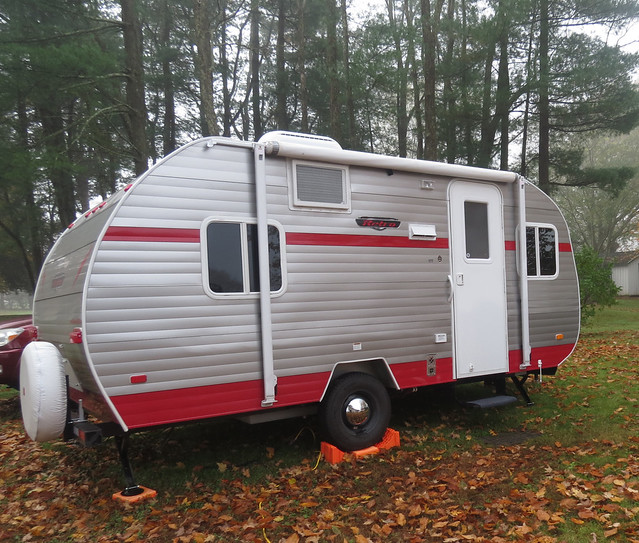 What aslag is using is exactly what I have too.
S

generok said:
How unlevel are the sites you're setting up in? If it looks like this, I'd chock the other wheel too, I guess.

Thanks for the chuckle!

I also use the BAL Leveler on the low side and it works great, I also use 2 chocks on the level side. ONCE a long time ago I unhooked my pup without chocks and a wheel no the front jack, it left me and went rolling down a hill, lucky for me that a worker in the park cutting grass hooked up and pulled it back to me (after he stopped laughing. I always have both wheels chocked before unhooking the RV now.
You must log in or register to reply here.
Share:
Facebook Twitter Reddit Pinterest Tumblr WhatsApp Email Share Link