I've no issue with anything on the camper until recently, it's is small, but it could cause a problem easy enough.

the seal on top of the entry door has torn away due to it's design and installation.

with door closed, the seal will glide right past the lip of the roof when opening the door with the roof down, when closing, the seal gets bent over backward. this action works the vinyl especially when the temps are low, and the "spine" of the seal then fails. 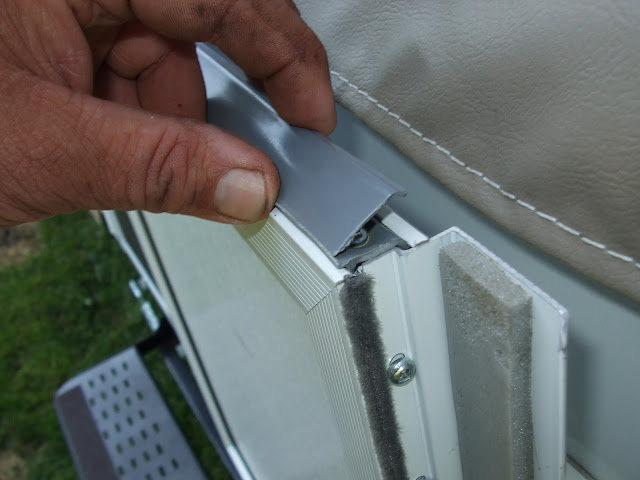 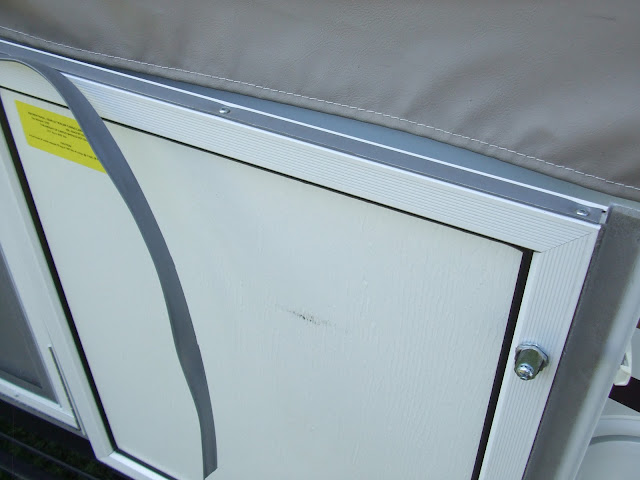 I've heard this is pretty common on these campers, but haven't heard of another fix other than replacing the seal ( seems that would be a yearly thing ? )

I contacted a local Forest River Dealer, and they can get the seal $4 a piece. Ok, order me 3. If it comes with part numbers, I will relay those on for future reference

I asked about warranty, just because, I've never made a claim, thought I'd toss it out, see what splattered.

I was told "We didn't sell the camper, We won't warranty it, and We don't sell pop-ups." heh Really ?

( WE didn't buy here to begin with because they didn't have any Pup's in stock at the time, we looked )

For the cost of the part, it's not worth hassling over, just tells me I don't need to go there anymore.

SO I guess I'll need to find a place who is actually interested in selling parts instead of opinion and attitude.

Go Ahead, Be That Happy Camper!

Mine did the same during the 3rd year and I have a '07. I can't believe they have not changed the cheap design of that part yet.
S

I have same problem. I can't open door without raising roof an inch or so.
7

I just seen a post a couple of days ago where a guy slid some thin plastic in between top and door top, then shut the door. The plastic helped the seal so it didn't catch. Blkvoodoo after reading your post I had to look quick to see if you were local! Same thing here in NY (attitude problem) I guess its a camper thing?

Thats the one! Thanks Raycfe
J

Ours did the same thing, the dealer we bought it from replaced it under warranty. I will try unlatching the roof suggestion as I am always afraid I am going to tear it.

I have that same seal on my '94. And yes it is slightly torn. Apparently Forrest River doesn't feel this is an issue, since they are still making them the same way. I do as others have mentioned. Unlatch the roof on the door side, and all is well.
G

I have this same seal on my 92 Starcraft and would like to replace it.
Anyone have a parts website or dealer info?
Thanks
C

Mine was torn last year shortly after I bought unit.. replaced it .. You can buy this stuff by the foot from an RV dealer . Just three or four screws to remove and replace and a sharp knife to cut..
I always make sure mine is headed into the unit correctly when I open/close the door when down. this stops the tear. but it is a pain...
G
K

I have a 2006 625D and is the seal being talked about on the small travel door? If so I had never tried opening or closing it with the roof down as the lip of the roof overlaps the top of the door and I could not open it unless roof is raised slightly.
R

My 2012 came off after a few months of use. I haven't replaced it and it hasn't been an issue yet. Going to have to look into it shortly though.
A

my 06 rockwood has the samething and mine has been ripped for about 3 years and i haven't noticed any problems. now the lower frame of the door sill has leaked and caused some damage and since i sealed it the problem hasn't gotten lost
R

Just because you CAN doesn't mean you SHOULD

My 08 Viking was the same way, I typically just unlatched the roof on the door side and that was enough to stop that seal from tearing. Yep, had to replace mine once early on as well, but not after unlatching the roof.
R

I'm going to have to try that after I replace mine. I've got one attached to the roof as well, so there's actually two of them that form the seal. The way the roof overlaps, it'd have to be raining sideways to get any water in it and I keep it covered. I haven't had any moisture issues at all with it even in the high gulf coast humidity, but I'm planning on replacing it anyway.

Wishing I was at Waskesieu!!

Our other trailer had that same seal, it was damaged and I replaced it as regular maintenance to that pup. Our newer trailer is similar to kjcamper, there is no way you are going to open that door without raising the roof an inch or so. At least that way there is no way that door will open while you are towing either, and that is a good thing.
R

I'm not sure exactly how it was that mine got ripped off. You can open it with the roof down and the weather stripping just barely makes contact, but enough to bend it back and forth all the way. It had gotten a small tear in the forward end..maybe 1 - 2 inches, but not enough to bother with. I loaned it to my in laws last December and it was ripped off when I got it back. From what they told me, it just peeled most of the way off when they opened the door. I'm guessing the cold made it brittle and the existing tear just gave way. I think unlatching the roof on my model and lifting it just slightly during the colder months should take care of it. If not, I guess I'll just be replacing it every year or so.
R

Just because you CAN doesn't mean you SHOULD