Retired from the Federal Government

Terrible, unless you like camping in a parking lot, and the way they packed the trailers in, made it difficult to drive through the campground on the one-way road.

I will say that the bathroom, with running water and showers, was in good condition; clean and with hot water. There is a reservoir for fishing; didnt see anyone come out with any fish, but they appeared to enjoy floating around early in the AM acting like fisherman.

Did enjoy the cries of the Coyotes at night, probably well fed with the high number of jackrabbits, which are actually Hares, running around the campground and they were some big jackrabbits.

And there is plenty to do in the area. Grand Staircase-Escalante National Monument (BLM) basically surrounds this plot of state owned land. It is beautiful and Bryce Canyon is about 40 miles to the west. There is a great dirt road from Escalante (city) to Boulder called Hell's Backbone. When dry, it can be done in almost any vehicle; if wet, especially in the spring it is probably impassable in some sections due to extremely heavy clay surfaces.

Nice bridge you need to cross over if you want to do the entire trail; appropriately called the Hell's Backbone Bridge.

Down into the Hell's Backbone Valley

Would I camp in this CG again? NEVER. This popup camping is fairly new to me, but at least the other campgrounds I have camped in with the popup (Zions Watchman CG; BLMs Sand Island, south of Bluff UT, and Horsethief CG, just north of Moab, gave a person some semblance of privacy. This Escalante CG gave NO privacy at all.

Down the road is Calf's Creek, a BLM campground in the GSENM, but it was full.

Ill address the really rude and cheap popup camper owners I met in the CG in a different message.
U

I agree completely. I drove through that campground last year and hated it. Zero privacy and sites so small that your bunk end could be over the neighbor's picnic table. Well, not quite, but almost that bad. Quite noisy as well.

Calf Creek CG is up UT 12 to the east and Deer Creek is on the Burr Road but both of them have very few sites and most of their sites are a bit tight for a medium or larger PUP. There are some free BLM boondocking places in the area too. Finally, there is a guy with private land that used to be a drive-in theater just west of the town of Escalante. He lets people boondock out there for a fee.

We have used it as a base for over 15 years, and while all the sites are not wonderful, it has been fine for our uses. We have hiked from the campground at Lower Calf Creek Falls, but have preferred to use Escalante as a base.
They have made lots of improvements to Esalante over the years, though it does occasionally show wear in places. Unfortunately, it is in an area in UT that has become "discovered", and we have encountered obnoxious and rude campers there, as we have in Zion NP, Grand Canyon in nearby AZ, and even (gasp) in the backcountry or more remote campgrounds all over the SW.
This is one of those campgrounds that we use as a base to hike and explore from, and we do not expect it to be a remote experience, it is certainly better than some we've seen and on occasion, needed to use.
This was our site last year, we were in what we think is the best site in the small lake loop: 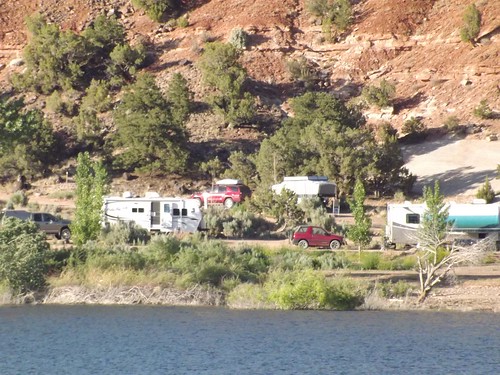 Lake section from the dam by kitphantom, on Flickr 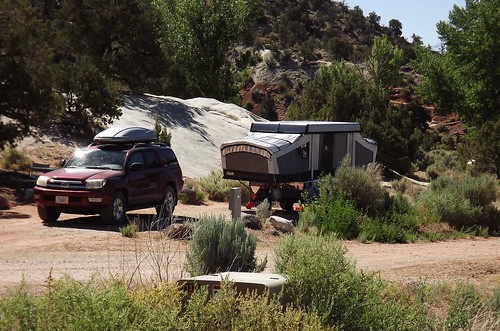 Retired from the Federal Government

I will agree, that is the best campsite in the entire place. I made that exact same comment to the lady (Margaret) who was camped there. I'll also note, she was by no doubt the only friendly person in that CG.

Since the Grand Staircase-Escalante NM is run by the BLM, there are hundreds of acres where you can legally camp, as well as quite a few dispersed (boondock) campgrounds already setup. They only ask that you camp in areas that have already been camped in.
N

We stayed here for one night and I would say it was adequate. Being next to the reservoir was nice. Campground lots are kind of tight but it worked as a stopover. I liked Calf Creek a lot but we can't fit!!

I camped in the lake loop in the spot closest to Lake. It was private and had full hook ups. We were between two bathrooms. The campground has been completely paved and more trees have been planted. The views were awesome from CG. I would definitely go back!
You must log in or register to reply here.
Share:
Facebook Twitter Reddit Pinterest Tumblr WhatsApp Email Share Link