Ghetto Fabulous or, sometimes you do what you have too....

there was a discussion with a fellow Pupper about how they thought their mod, while it was very functional, they considered it " Ghetto Fabulous"

Having seen the mod, I thought it to be very resourceful and actually somewhat inspiring THEY ( I will not say he or she to protect identity and their supposed embarrassment

) thought it was a contrived "redneck" get it done mod that shouldn't have any merit.

I'm betting others have done similar ( if not the same ) "mods" or improvements and thought nothing of it.

This person pretty much DARED me to post the pictures of my (now) wife and I's FIRST camping adventure and the " Ghetto Fab" tent that made it all possible.

July 4th 1996, we had been in NC about 3.5 months, we knew NOBODY, save for the people we worked with, and being a holiday weekend had nothing better than to road trip to the Outer Banks of NC ( 4hour drive one way ).
It was supposed to be a day trip, but we enjoyed ourselves so much, it also being our first time ever to the ocean ( we're from the Midwest )
I asked my sweetie ( Holly ) if she wanted to stay the night..." Where ? " was the reply....
I pondered this for a few, realized being a holiday week, there would be NO rooms available that we could afford, I contrived a plan. It had been years since I had gone camping of any sort.

She just looked at me as we drove into Manteo, just a confused look...... and we pulled in to the parking lot of an ACOE Hardware. we sauntered ( was too hot to walk) inside and started perusing the wares. ( mind you, I'm still working it all out )

Ah, a FEMA tarp ( blue of course ) hmm, oh look, 3/4" EPDM conduit, 2 sections should do it ( 10ft ea) and....ah yeah, there it is, 100ft of poly rope, and about a dozen rubber bungees ( flat bed straps ) approx $30 later we're headed to the camp ground at Oregon Inlet.
Holly is looking at me and shaking her head the whole time as I work it all out,
from the outside, it looks basic and simple, ( and it is ) but it took some configuring to make it work. 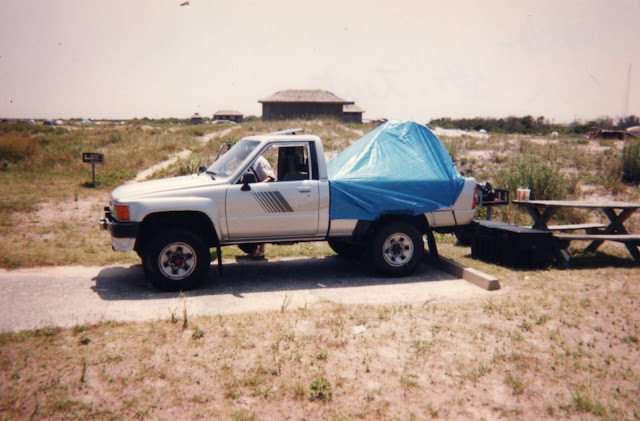 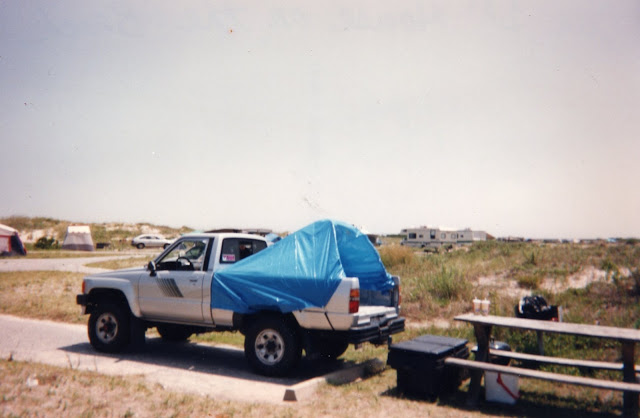 after I'd got it all tied and strapped down, we realized, oh, we don't have any food or drinks..... and the only place close was the rather expensive Oregon Inlet Marina across the hiway......
So we jumped in the truck, tent and all and hauled our new camper back up to NagsHead for forage for food and drink a foam cooler and a throw away camera.
Again, she just looked at me, I was buying all kinds of stuff. Aluminum foil pans, a bag of charcoal, a tube of biscuits, sausage, eggs, ice, and microwave popcorn. She was VERY confused now......

we drove it all back down Highway 12 AT the speed limit !! with a LOT of strange looks and reclaimed our campsite

The only blanket we had was the old full size sleeping bag I'd had when I was a kid......and a bed sheet. no pillows.

made dinner had a few drinks, then I got out the microwave popcorn....... ( this is where she was REALLY looking at me funny )

guess what is in those little pouches ? YUP, oil and corn in a puck. remember the foil pans ? and we had some cheap steaks for dinner, cooked on the campsite grill. so the charcoal was still hot.

There you have it.
Burned it a little, but a nice snack to end the day.
in the morning, after very little sleep battling the mosquitos ( the cover is also a nice wind break, so the Skeeters have a dead zone to feed on the bait... US ) We commenced making breakfast, reusing the foil pans, cooked up the sausage, scrambled in the eggs and set them aside.
Now I grabbed the tube of biscuits and laid them in the yet unused foils pans ( I bought 4 ) set the charcoal up under and on top, and baked the biscuits. burned most of them, but hey, it's still food right ?

The moral of all this, some times you do what you have to do, no matter what someone else may think.

I'll take "Ghetto Fab" over not doing anything every time.

SO, what have ya got or done that you thought was a pretty darn good idea and worked WELL, but someone else may have just laughed hysterically at ?
B

Great story. Not a bad job on the tent.

Now THAT is redneck ingenuity!
M

thats awsome! i like the way you tink, and love that your wife just went with it!
B

I've never rigged up a campsite, but DW and I rented a cabin in the PA mountains which was fully furnished and had a stove, as advertised, but had 1 cooking pot and no cooking utensils or prep bowls. Our dinner needed a can of beef stock. That's when we found we didn't have a can opener. After a minute or two of thinking, I ran outside to the car. We opened the soup with the hubcap remover, beating on it with the lug wrench. Next, the biscuits dinner was supposed to go on needed making - without a bowl to mix them in or anything to bake them on. We mixed them in the coffeemaker's carafe and baked them on the broiler pan we found in the bottom broiler. I also once duct taped my hood closed after an accident. You will also find that the radiator in my car, thanks to the aforementioned accident, is held in position entirely with zip ties, as is the headlight trim and the splash pan underneath. The best example though is the recently revamped Ghetto Power Lift, semi-installed in our pup. A previous owner added a 40+ amp power winch to our pup and wired it through the 30 amp converter, with predicable results. I've spent all spring rewiring our pup to correct all the damage and make it so we don't have to hook our power lift up to the car with jumper cables to raise and lower the roof. All I have left to do is figure out how many amps the thing actually pulls and put in a fuse that will handle the load.

It was funny that Kevin was wishing we had pictures of the set-up and I lit up and said "we do" I just have to find them.

scouting was always ghetto-fabulous for us on adventure weekends in the wilderness !

Holly and Kevin, you two sound like a fun couple!


Kevin you remind my of my brother.Always thinking out side the box. Him and I used to go camping in his sail boat and we would bring poles and catch our food and cook it on any small island we could find in his little hibachi. If we did not catch anything we would eat MRE's. Good times.

Love the story. About four years ago we were camping with all four of the kids and were weren't fully prepared for a rain storm that just refused to leave. What was forecast as one day turned into four. I had only brought one dining canopy so that meant using that for cooking and cramming into the tent to eat. Well my son, who was nine a the time, was a huge fan of Les Stroud on Survivorman. He was convinced we could scavenge some tree limbs and create another dining canopy with an old tarp that was in the van. A few hours later we had an additional 10' x 15' area for dry dining. Was it pretty? No way. Did it work? You bet it did but better than that was the bonding with my son and how proud he was that his idea worked. I'll take that over Disney any day. Just don't tell my wife I said that!
P

brought a few tears of joy and pride to this ole rednecks eye......

Speaking of doing what you have to, I spent 30 minutes locked in a shower room near Capitol Reef NP when the doorknob fell apart after my friend yanked the door shut. No windows, no phone, no one else around to hear me beating on the door. My knife would've made quick work of it, if it hadn't been in the Jeep. I found a tiny piece of metal on the floor and used it to dismantle some of the commercial lockset, then used those parts to take the rest of it apart.

I carried the parts past the laundry room, which alarmed my friend because he thought they were broken Jeep parts (he's mechanically inept). When I gave the handful of parts back to the staff, they didn't believe there was anything wrong with the lock. I told them that as nice as their shower room was, I didn't spend 30 minutes beating on their door because it was fun. My friend said he thought I'd been in there a long time, but as bad as I smelled, he wasn't going to interrupt me.

Not going to tell you how I know this, but a plastic trolling motor propeller mounted on a gas powered weed-eater does not an outboard motor make!.
J

Bachstrad, that sounds like a Red Green episode....
C

What an awesome story, but to tell you the truth the whole time I was reading it I was thinking the moral of the story was
Holy crap, marry that girl!!
Glad to hear that you did!
S

CampingCindy said:
What an awesome story, but to tell you the truth the whole time I was reading it I was thinking the moral of the story was
Holy crap, marry that girl!!
Glad to hear that you did!
Click to expand...