Tell me all the great things about the Dark Side

We are thiiiiis close to going to the Dark Side. Well, I guess we're already a teensy bit dark since we have a Chalet pop-up

But with the Chalet, there's still the whole set-up/take down thing. And it has no bathroom/shower. And I hate having to crawl over DH to get out of bed. And it's small. And since we camp year-round, it can get pretty cramped with the two of us and two dogs when the weather forces us inside.

I LOVE our Chalet so much and I'm really sad at the thought of selling it.

Still, it's a little scary to make the move. So before I pull the trigger and put down that deposit, I need a little extra gentle push.

Tell me why you LOVE the Dark Side.
L

1. you don't have to unpack the thing when you get home. it stays packed with an entire set of everything, including curling irons, hair dryers, etc..
2. no setting up to dry out.
3. rainy day? turn on the tv or watch a movie.
4. air conditioning, and heat, both much more efficient.
5. midnight potty.
6. much bigger awning to get under.
7. company? have a seat on the couch or the rocking recliner.

Best thing is not being woken up for 3 am bathroom runs.
Stays loaded, ready to go all season. just add food, hitch up and go.
Larger fridge, Can have icecream, an oven to bake cookies.
NO CANVAS to worry about.

We went to the Dark Side last fall, from an 8' Coleman Cobalt pop-up. Since we chose to stay with a small TT, we have not gained as much space as many of the other have who have moved - but then, we didn't have the space in our pups that many do, either. 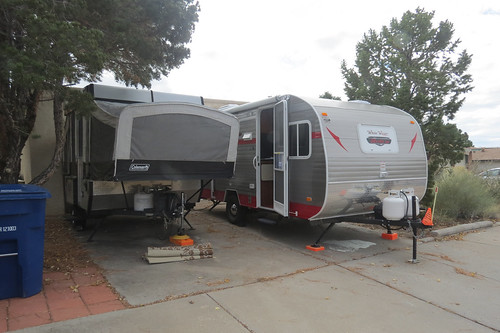 First, and foremost for us, is the very much reduced set-up. With my back issues - not to mention other creaky joints and being 60 - we realized the only way for me to keep camping, especially solo, was to go to the TT. The first night I had it out, which was solo, being able to park on a level site (which doesn't always happen), stabilize, and not even unhitch from the TV, then open the door and walk in was wonderful.

The walk around bed, with storage underneath, is awesome. 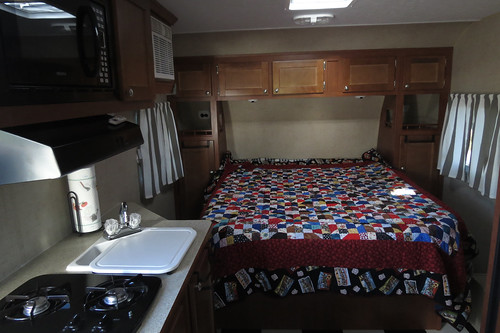 With the Retro, we have the very small bathroom. We'll be using the toilet this year, but for the 2 trips we took in it in the fall, we just used the gel system we'd been using in the pups. We will seldom use the shower, but it is there as an option.

We do have a/c and a microwave, for the not very often times we have power. No TV for us.

Refrigerator/freezer - which will expand our food choices a lot, though we will continue to use the ice chest in the TV (we often eat lunch away from camp). DH was going to use the 'fridge for dry storage, until he realized we could have ice cream.

The Retro was the most open-layout of the TTs I looked at. We now have a picture window next to the dining table, as we did in the first pup we owned - I hadn't realized how much I had missed being able to sit there and look out easily.

While I will miss some things about the pop-up, the choice to move to a TT was made a lot easier for us by the necessity of doing so. DH can still backpack, so he gets plenty of ground tenting time most years.
H

lawniz said:
1. you don't have to unpack the thing when you get home. it stays packed with an entire set of everything, including curling irons, hair dryers, etc..
2. no setting up to dry out.
3. rainy day? turn on the tv or watch a movie.
4. air conditioning, and heat, both much more efficient.
5. midnight potty.
6. much bigger awning to get under.
7. company? have a seat on the couch or the rocking recliner.
Click to expand...

from a pup perspective.


Again find what works for you. Get outside and enjoy!
N

When traveling you always have a bathroom ready to use.
H

First thing we noticed, was as we were preparing to go in and settle in before bed, we didn't have to take turns heading off to the bathroom while one watched the dogs.

1. Storage.. a lot, and it doesn't need to be unpacked to set up/ take down.
2. A/C. We own 2 northern breed dogs, they love the cold.
3. Solid. We have two dogs, no escaping out a canvas bunk.
4. Big fridge. Propane. Beer/food stays cold. Can freeze ice cubes.
5. Even in a busy/packed park with the solid walls and A/C blower on low, outside noises disappear.
6. packing up. Usually we're spent after a week with friends. Pack things so they don't bounce around. Drive home, plug in.. forget. Until you have time to get in a unpack.

We just traded in our 20 footer for a 26 foot bunkhouse. Half my non-work clothes were still in the old camper when I unpacked it.
N

The main reason I moved to an HTT (note, I still have canvas) is to be able to load/unload stuff without popping. Secondly but up there with my main reason is the ability to have a fully functional kitchen/bathroom on the go. No more rerouting 6 miles + for a bathroom, lastly, the ability to pull to a walmart parking lot or a rest stop and be able to lay down in the camper without much prep.
I still have to deal with the canvas issues but at this time I still want the canvas feeling, I just dont like to sleep in the floor. I love my potty but I have had those in the 2 pups I have.

The only problem on going from a popup to a HTT or TT is the possibility of having to upgrade TV as well...
good luck!
H

ND Mike said:
When traveling you always have a bathroom ready to use.
Click to expand...

Not 'always' but pretty darn on the mark here. Our first TT had a slide that had to be opened in order to get the bathroom door open. But our new one allows access to the fridge, bathroom, most everything without the slide being out. A much appreciated change.
F

lawniz said:
1. you don't have to unpack the thing when you get home. it stays packed with an entire set of everything, including curling irons, hair dryers, etc..
2. no setting up to dry out.
3. rainy day? turn on the tv or watch a movie.
4. air conditioning, and heat, both much more efficient.
5. midnight potty.
6. much bigger awning to get under.
7. company? have a seat on the couch or the rocking recliner.
Click to expand...

8. Much larger frig, with separate freezer
9. More comfortable beds
10. Usually more cabinets/storage
11. Bathroom, dinette, frig to use at stops while traveling
12. Much more quiet at night while sleeping

Oh, this is SO what I needed to hear (read). Keep 'em coming! It really helps.

This is what we're probably going to get, a Passport Elite 23RB.

I didn't think about it until some of you mentioned it, but the bathroom and kitchen can both be used with the slide in.

I get a little dizzy looking at all those cabinets and that counter space!

Seriously, keep telling me all the awesome things about the Dark Side. Supposed to put down a deposit tomorrow and I don't want to chicken out!

Besides what everyone else says, cookies and Ice cream!! but in all seriousness, we really love all the conveniences that a TT has to offer. Some of the rain storms that we had camped in with our TT would have probably caused us to go home in our pup...really had a hard time trying to dry our pup for two weeks after getting home from a wet camping trip. The really nice thing about the TT is that you can leave everything in it after you get home. All you have to do is plug it in and the fridge will stay cold so you can take time to take perishables out. My wife can also load it while I am at work, I just come home and hook her upand go and it is something that my wife could not do with the pup. Good luck with your decision.
J

I'd like to be able to swing into a rest area or similar and cook lunch or take a quick nap.
W

Camper is on the side of our house. No fees.
Upgraded TV and get about 2 mpg less now than with the pup and our previous tv. If 2mpg will break me, I really need to look at my finances and whether or not we could afford to camp.
There are so few campsites that we can't get into, it's a chance I'm willing to take. Then again I am pretty good at backing in as I move trailers at work a lot.

The added space, bigger fridge/freezer, bathroom (3 kids), more usable outside space with the 16 ft awning, conveniences of home when weather focus us inside (not everyone likes to read), and most important to me is the ability to load/unload without having to pop up/down before and after trips.
N

No more trying to roll up a bag awning in the middle of the night before a storm, now just push a button.

We also have a "triangle popup" aka Aliner. We LOVE the easy towing, the park anywhere small size, the thirty second setup, and the "almost camping" aspect. However, age has reared it's ugly head; I cannot make it all night without a potty visit. The need to find campgrounds with showers becomes tiresome (as does the frequent lack of hot water). We bought a 20' TT and are looking forward to this summer's road trip, however, I am not looking forward to jockeying this beast around. All things in life are a compromise.
H

What ND Mike said above re: the electric awning! Also applies to the electric slide (our pup had a dinette slide, which gave lots of room but was manual... of course, it wasn't that much effort to deal with).

For us that are getting on in age ;-), it's just some added comfort like the bathroom, larger fridge (and a freezer!), oven, and separate bunks for the kids. Our pup had A/C so we were kind of spoiled. Since the TT has closets, it's kind of nice to not have to pack clothes in duffel bags, or stack them in the pup or truck bed during transport.

IMHO, I think the maintenance tasks are different but no further ahead - instead of greasing/lubing roof supports and cables, now it's the regular dicor roof treatment and slide seal treatment. No canvas to clean, but now there's way more surface area to wash and wax. And instead of just a sink & external shower to winterize; it's now a sink, bathroom sink, toilet, shower, external shower, and gray & black tanks to winterize ;-) But I'm not complaining!

The Passport looks a lot like our Wilderness, you'll probably love it. It's a big step but go for it!