The entry door on the Coleman pop up campers is a well designed and functional piece of equipment that I feel outshines the two piece doors any day. I decided to use the OEM entry door for my conversion because it is nicely made and it already fits nicely into the threshold of the existing doorway. 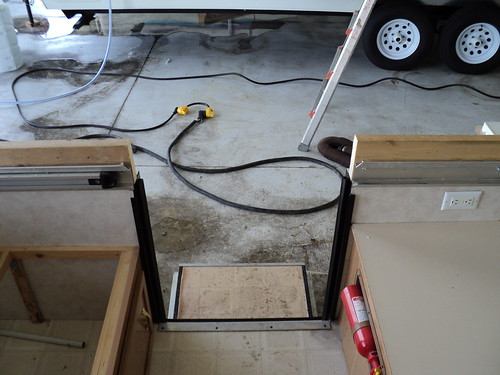 The other thing that you might not realize right away is that the sliding track for the bed frame actually passes all the way across the doorway and into the track on the other side (also one reason why the rear track could not be removed, if you wondered). The interesting thing is that you can leave the door in place and slide the bed in. Crucial for this design to work. Got lucky again!
A

At first the studs were literally just screwed in twice at the bottom and stuck straight up in the air. I built the doorframe first and worked out from there. Later on I used temporary lateral support boards at the top to keep the stud spacing true and then removed them after I built the ceiling cap (We'll get there soon, I promise!) 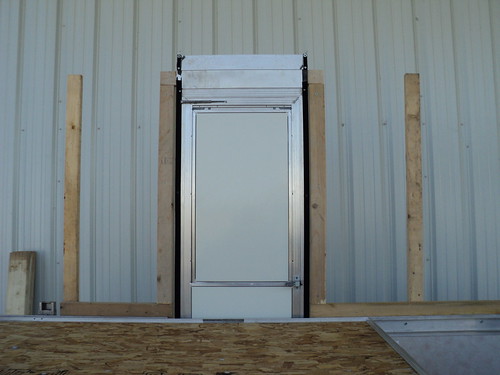 Here you can see the bed in its home position, engaged almost a foot into the rear tracks. I will be glad I've got the full queen size bed eventually...
A

Outside view of the door and doorframe. The frame has enough overhang it eventually developed into a nice little alcove. 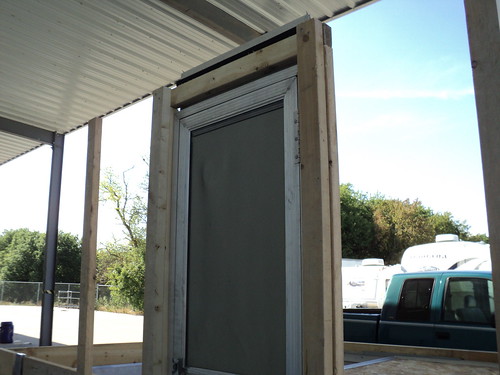 I had to cut the top edge off the door to get it under my ceiling cap.
J

I will be following this to see how it all comes together!
A

Each stud is made from a 2x6 ripped right down the center on a table saw. I call these babies my custom 2x3s. I used salvaged lumber in this way until I ran out of usable pieces. After that I started using real 2x3s purchased at the local homestore. 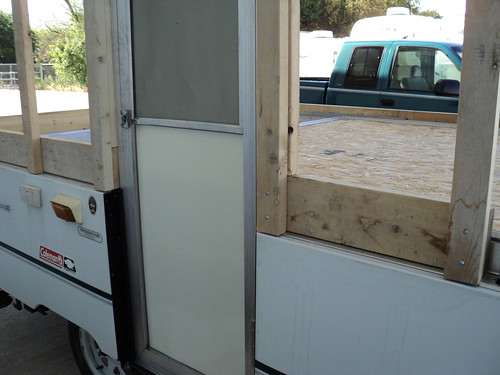 It was almost too good to be true. The width of the 2x baseboard and a 2x stud was just enough to match the width of the outer wall of the pop up body. Once I started laying down the siding it matched up perfectly.
A

The frame comes together. 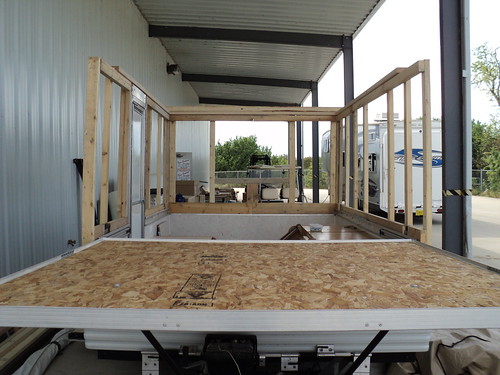 The stud cap/ceiling support consists of a 2x4 turned over on its side. This hopefully provides lateral stability while the exposed edge will give me something to anchor the ceiling panels to (eventually).
Z

Neat work. Interesting concept. I was going to ask if you had considered using metal studs and such to run across the roof, or even in spots on the sides? I think I'm going to use some in my roof rebuild. Lighter than wood and plenty strong.
J

are you going to do away with the one slide out and just use the other and is it actually going to slide?
A

I only wish that I had the aluminum available to me to frame it in metal instead of wood. I might have gotten a hold of the aluminum but I have no experience welding it. Probably better off sticking to what I can master. Future projects may have to incorporate aluminum framing.

The front bed remains and functions as the bedroom. It remains retracted while in transit and then slides out to it's fully extended position while camping. The rear bed is gone, and a rear wall begins to take shape. At this point I realize that this thing is going to be really dark and stuffy inside if I don't put some windows in it. After a lot of scrounging and scrapping of various plans I found a rectangular emergency exit window with a black frame and started framing the rear wall to hold it. 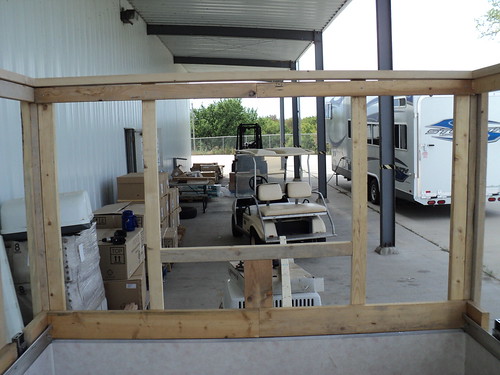 I still wish I had been able to incorporate more natural light, but the windows I could find were either dysfunctional or mismatched. Even though I'm building this out of salvage I still wanted my window frames to match. I did leave an area in the bedroom to put in a window later, but have not done so at this time.
A

Closeup on the rear corner. Here you can see the temporary support beams that held the stud spacing during the initial assembly. Once the stud cap was in place all the way around, I removed these beams one by one. 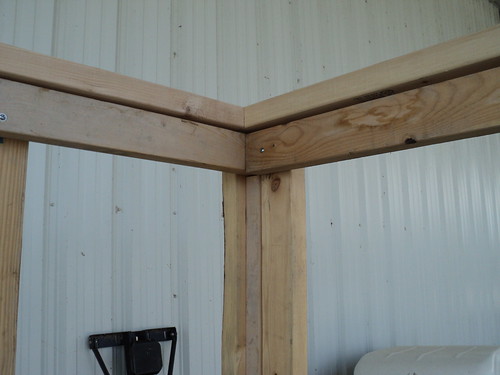 Temporary mock up of the front door and doorway. Even though this is where the framing and construction started, it remains one of the unfinished parts of the exterior. 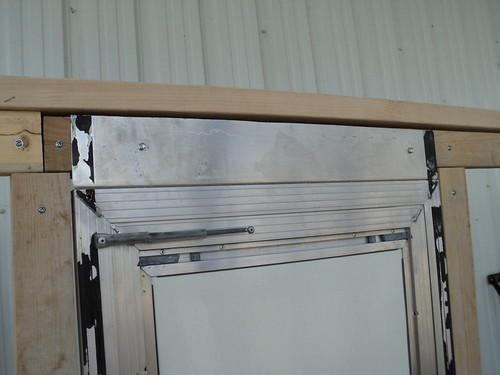 In this stage of the process I was trying to come up with a simple design that would also function in every way it needed to. Some decisions had to be made without knowing whether the outcome would affect or be affected by something else later in the project. For example I built the doorway with little tolerance between the sides of the OEM door and the frame itself without taking into account any surface covering to protect the bare wood frame from the elements. The only solution in the end was to use filon (fiberglass sheeting), which is very thin, to cover and protect the smaller surface areas on the exterior.
A

As the framing came together I was still largely unsure about how to properly build the front face of the camper. Should it have any kind of contour to it for aerodynamics? Should the outside of the sliding room double as the front face of the camper? What kind of opening should I allow for proper air seal and weatherproofing? These details were some of the last things that I tackled. 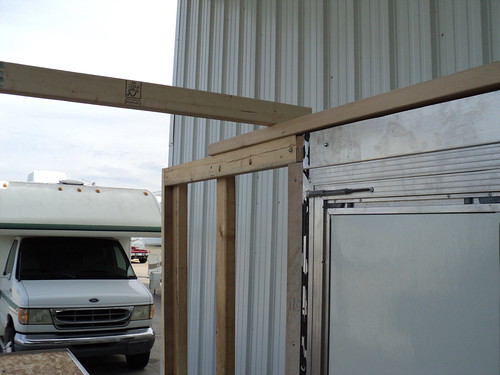 I finally decided that since the sliding room retracted so far into the interior of the camper that I would use a large compartment door to keep the opening sealed when in transit or storage. As a bonus the door will help serve as a watershed for the bedroom when in use.
A

Here's where things get interesting. 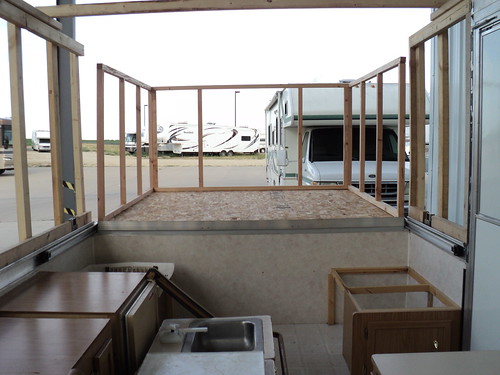 As soon as it started to take shape my excitement level just went up and up. I'm really going to do this!
A

Here you can also see how I attached the front sections of baseboard to the body of the camper. Small aluminum brackets helped hold them in place until I was able to attach the studs and braces. 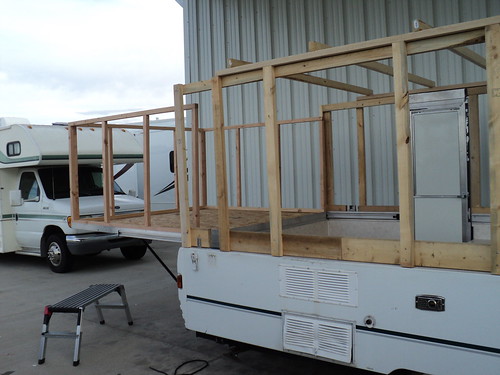 Until I started laying down the ceiling beams the entire structure was still pretty shaky. It is clear that these campers get much of their structural integrity from the interior and exterior panelling, screws, nails, glue, etc. and not just the framework
A

The bedroom framing needed to be as light as possible so I decided to use 2x2 pine ferring strips. 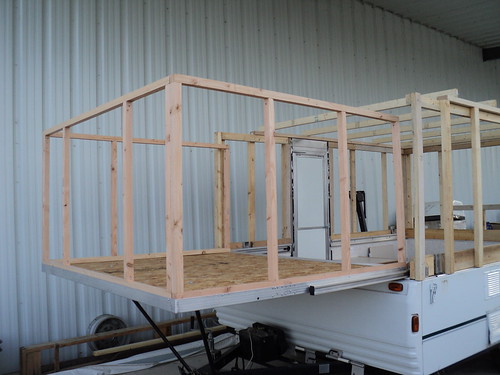 After the initial framing I started to notice that the bedroom wasn't sliding as easily on it's tracks. It seemed like weight was quickly becoming an issue...
A

The main framework of the camper was built piece by piece one stud at a time, while the bedroom framework was assembled in panels on the ground and then erected into place and secured to the baseframe. This was also the only way that I could do the work by myself. You have to come up with some special tricks when you're working solo. 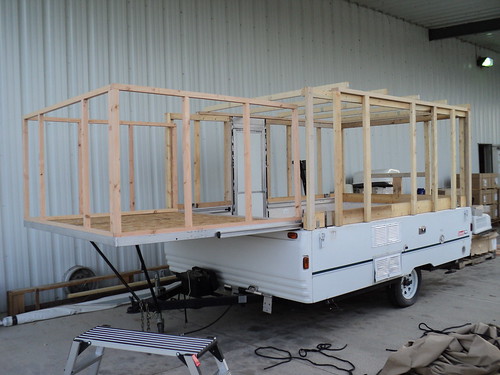 It's really starting to look like something tangible. Can we go camping yet?
A

Though the framework of the bedroom will be lighter, I don't plan on walking on the roof or mounting anything to it so I am hoping it will be strong enough. 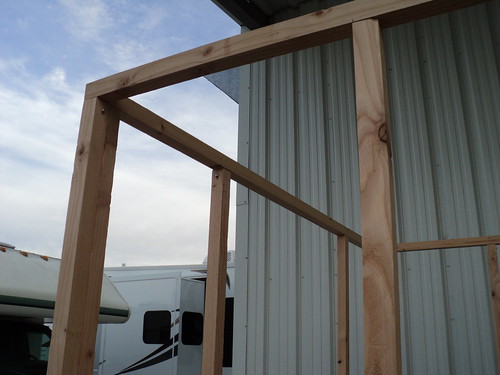 After all it will never need to stand up to the wear and tear of highway travel as it will be nestled safely inside the camper. 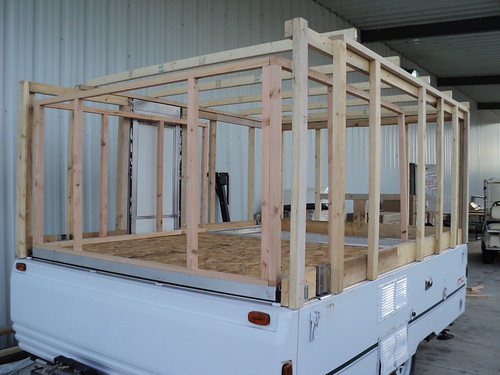 Have you thought about openings in the bedroom area? Skylights to look up at the night sky or windows that can be opened for a forest breeze in the evening. And then there is always the weight question. Do you have access to truck scales nearby or any way of figuring out how much weight in total it might be. Has to be a concern at some point.

OTOH, it looks really nice and will probably be great once you are finished. Might have to tow it with an F-350 but who cares.

Do not forget to prewire the bedroom with electric and sound (maybe even a small LCD panel for TV at night?) whether you plan on using it or not. An umbilical cord snaking into the interior wall with a terminal strip for wire connections would work pretty well.

I mentioned steel studs, as they are really light weight, take screws like wood and are plenty strong. Might be a good option for the slide...
B

You NEED to put in diagonal strips of 1/2" plywood from one corner of the roof down to the opposite corner of the box. You'll have to sawcut in recesses so it's flush with the studs.
This will take the shear loads and make it rigid.
You must log in or register to reply here.
Share:
Facebook Twitter Reddit Pinterest Tumblr WhatsApp Email Share Link