Where to buy deep-cycle battery?

Where does everyone find their deep-cycle batteries? Everywhere I've looked, all I can find is marine batteries. Sometimes they even claim they're deep-cycle, but then you read further and it says "Deep Cycle/Marine".

Napa or Costco. I get mine at Napa. If you need to warrantie then there always seems to be a Napa around.

We have used the marine deep cycle battery for over 25 years. We like the G-31 with a weight around 65 lbs. Good batteries. Design is almost ideal for our needs of lots of amps with a low amp draw rate. Manny people have gone to Golf Cart batteries with lot of amps and a high amp draw rate of 20 to 25 amps. My experience is you almost can go by the weight of a battery.

you should be able to hind them a battery shops, walmart samsclub

Advance Auto can get you any deep cycle you want. I picked up a GC12 from them.

I use and have used deep cycle marine batteries for a long time and have never had a problem the hint is deep cycle on the label.

I got mine at Battery's Plus the seemed to be priced as reasonable as anywhere and my AGM's have a 5 year warrantee .
F

ddep cycle /marine is fine. what you don't want is a deep cycle/starting battery.

tfischer said:
Where does everyone find their deep-cycle batteries?
Click to expand...

The best was a Minnkota battery but I haven't seen them for sale for years. I was going to switch to AGM batteries last year but there was a shortage for them the at Cabella's and when the Batteries Plus batteries died I was in a pinch and got two regular maintenance batteries from Nelson Marine in White Bear Lake.

It seems that the batteries sold at stores that specialize in boats and outdoor activities (Joe's Sporting Goods, Cabella's, Gander Mountain, Marine stores) have pretty decent batteries. I bought an extra group 27 at Fleet Farm last year for the pup. I haven't used it much so I don't have an opinion on it yet. It seems descent enough.
F

read the specs on agm's. they're good cause they won't spill, no water to worry about and they can take a beating. the downside is they don't last as long. they don't withstand as many charge\discharge cycles as a flooded cell.

We bought our "golf cart" 6v deep cycle ones at a battery store, where/when we ordered our solar panel three years ago. This is the type of store that sells all sorts of vehicle and industrial batteries.
M

I got my new group 31 duracell at SAMs just a month or so ago, they had $20 off, so it was like $75 which is a very good deal for a group 31. Fleet Farm also has some good options. Both the Duracell and the FF batteries are East Penn made and high quality. Marine Deep cycle is what you want - not the dual purpose starting ones.

My current battery lasted less than 4 seasons. Its failure mode was to drop significant voltage when under even a small load (e.g. the water pump). It was a marine battery I got at Menards (Excel brand).

I"m limited in space on my tongue, so that pretty much rules out dual golf cart batteries. I currently have a group 24 but think I can squeeze in a larger one like a 31. I was pretty severely limited in tongue weight on my old van but my current van has more leeway that way.
C

So lets talk brands. Who are the top 3-4 Battery makers that everyone trusts. I need to replace mine and need to get a good quality one that will last more than one or two seasons

Costco has G27 batteries for about 85 bucks (6v golf cart batteries also for about 85 bucks each). Mine is an Interstate, 1.5 years old, not in service, and is currently sitting at 12.59 volts after not being charged for 4 months. It's due to be equalized this weekend, and will hold its charge for months.

My in service battery is a Trojan T-1275from USA Battery Sales, which is a 12 volt golf cart battery rated at 150 AH. It is about the same length as a G27, but taller, and weighs in at about 85 lbs.
It's expensive, but I just can't use 2 6v golf cart batteries because of the weight (130lbs), and has a much better AH rating than a G31.

USA Battery sales appears to be an intermediary- I called them up, there was a location within 25 minutes of me that they were affiliated with, so I arranged to pick it up.
F

Most are made by Johnson Controls or East Penn. They have been buying everyone up and most stores buy from them and put their labels on them.

I have Interstate Deep Cycle /Marine it came with the TT when we bought it new. When I do replace I usually go to Tractor Supply and get the industrial deep cycle batteries designed for farm equipment

I just purchased four GC2 6V batteries from BATTERY PLUS store here locally.. They were $85 each and they accepted regular 12VDC battery dead cores... I am presently building up my new Battery bank that will be using two groups of these 6V batteries wired in series... This will give me over 400AHs Battery capacity.

I am planning to install these extending out over my front POPUP trailer Tongue area replacing three 85AH Interstate batteries that lasted from 2009 to a couple of season's back... My new battery bank will be inside one of those Torklift slide-on lid battery boxes. This will fit perfectly inside the welded angles you see here on both sides of my Interstate batteries... All of this will extend out to the second-in uprights on the front of the deck side support rails. 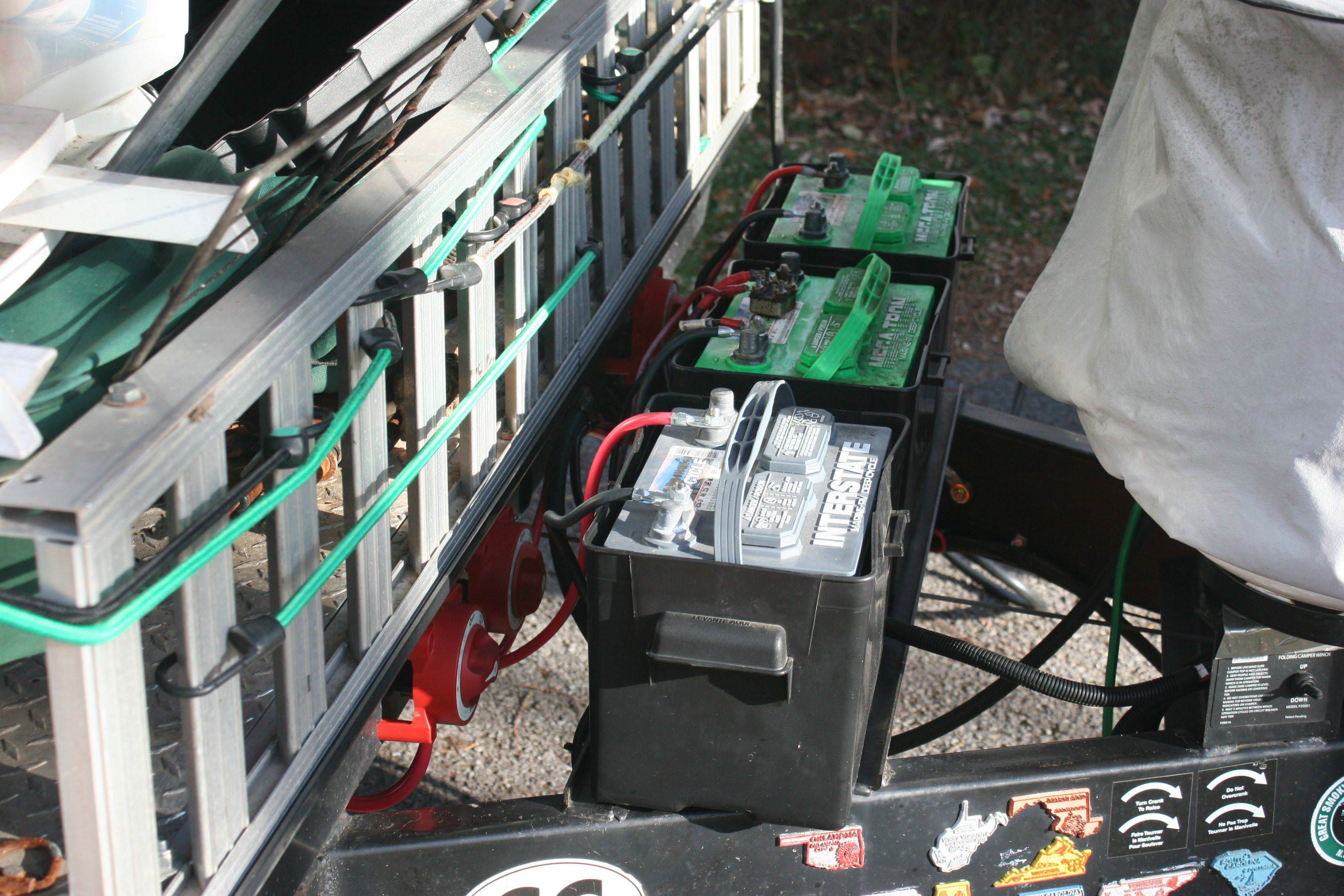 My Torklift Battery box will look like this except mine has two 10WATT solar panels on it, one installed on each end giving a good trickle charge to my two 12V battery bank groups when sitting in high sun... 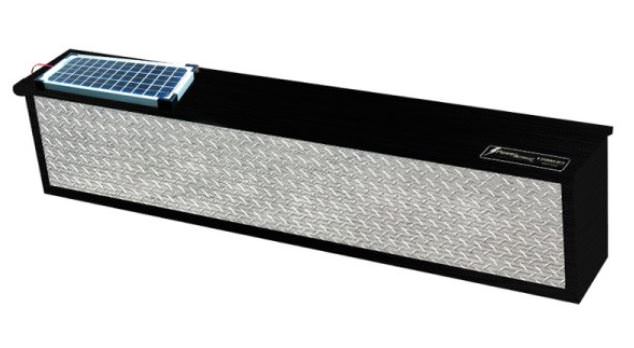 For automotive series batteries there are just 3 manufactures in the US. Decka Exide and Johnson Controls. When you get into the industrial batteries there are a few others.
Any of battery from the 3 will last for years....if properly maintained
and PS.. Interstate does not make a battery
F

Interstate is owned by Johnson Controls. East Penn bought Deka. Exide is now considered a small player after nearly going under when Walmart started to use Johnson Controls

There you can find this link